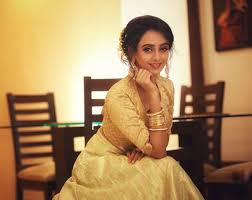 Zalak Desai is a well-known name in the television world.

The actress is currently slaying in the role of Rukmini in Star Bharat’s popular mythological drama series Radha Krishn.

Well, Zalak has been a part of the television world for a very long time and has some hit shows to her credit.

The diva is always lauded for her stellar performance in all her shows.

Not many are aware that Zalak is the daughter of a renowned actress Falguni Desai who managed to establish her name in the showbiz world.

We got in touch with Zalak who got candid about her current show Radha Krishn and much more.

Journey in Radha Krishn as Rukmini has just been amazing. More than a show, Radha Krishn is like a family now as I have been associated with the serial for a very long time. Be it cast or the crew, it is one big family. Thanks to the character and the kind of shades I have had to play, it has been great. As an actor, I have really been happy with the kind of work that I have done in the show.

Sumedh and Mallika are really good friends. In fact, not just them the show is one big family. We all are young and are in the same age group. We all really gel well together and it’s a nice vibe we share. This goes for the entire cast of the show. I would want to continue to cherish this and make more memories with them. It’s an amazing bond and I love how we grow with each day as friends.

My mom has been the major inspiration behind me taking up acting as a career. She has done a lot of shows. In fact, some things that I haven’t done, she has done in her life. She has done movies, plays too. I always had a lot to learn from her. So, I would deeply thank her for it. If it were not for her, I wouldn’t have even considered taking up this career. I would be forever grateful to her for the wisdom and for the genes (laughs).

Mom always told me to stay grounded and that is what she firmly believed in and kept repeating it irrespective of however you fly high in your career.

She always told me to respect the work that I do. Be it punctuality or sincerity, I always make sure to respect my work.