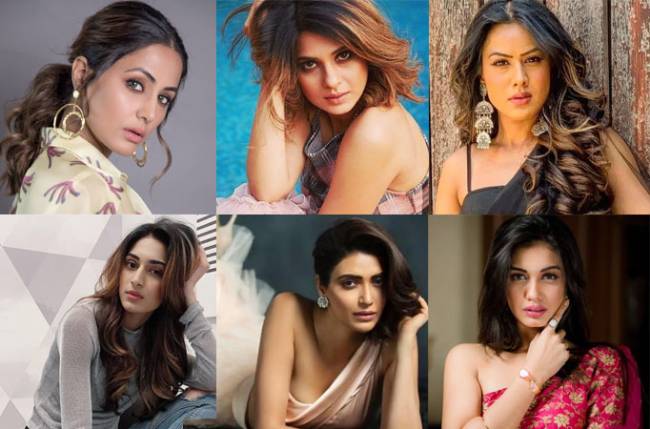 The Times 20 Most Desirable Women on Television 2019 list is out. Have a look.

1. Hina Khan tops the list for the second consecutive year. The actress, who played the demure Akshara in ‘Yeh Rishta Kya Kehlata Hai’ for many years, was appreciated for her style quotient on ‘Bigg Boss 11’ and as ‘Komolika in Kasautii Zindagii Kay 2’.

Claim to fame: Known for her work in TV shows like ‘Dill Mill Gayye’, ‘Saraswatichandra’, ‘Bepannah’ and ‘Beyhadh’, Jennifer has only raised her glam quotient higher in ‘Beyhadh 2’. She continues to be one of the most sensuous women on the small screen. Her classy sense of style, coupled with that sassy attitude, sets her apart.

Claim to fame: She commands a huge following on social media, thanks to her hot pictures and no-holds-barred approach. Known for her bindaas attitude, the actress speaks her mind and follows her heart. She was seen in ‘Ishq Mein Marjawan’ after which she became an integral part of ‘Naagin 4’, where she essayed the titular character. Nia is also known to be a fitness enthusiast.

Claim to fame: Erica’s journey in showbiz began when she became the winner of Bombay Times Fresh Face 2010. She was also a finalist at Femina Miss India 2012. The pretty actress is currently seen in ‘Kasautii Zindagii Kay 2’, in which she plays the popular character, Prerna.

Claim to fame: The leggy lass impressed viewers with her daredevilry in ‘Fear Factor: Khatron Ke Khiladi’ Season 10. She is also one of the fittest actresses in tellyland.

Claim to fame: ‘Splitsvilla Season 10’ runner-up and ‘Ace of Space 1’ winner, Divya is a model-turned-actress and anchor. She is also known to speak her mind on social media.

Claim to fame: The actress, who hails from Pune, started her career in 2013 with ‘Khelti Hai Zindagi Aankh Micholi’. However, her big break came a few years ago, when she took over from Hina Khan to play the lead role in the longest-running daily soap, ‘Yeh Rishta Kya Kehlata Hai’.

Claim to fame: Surbhi became popular with ‘Qubool Hai’ and went on to star in ‘Naagin 3’ in 2018-19. She was seen in ‘Khatra Khatra Khatra’ last year. The fit and stylish actress prefers to keep a low profile.

Claim to fame: Runner-up on ‘Splitsvilla 12’ and also a contestant on Ace of Space, Mumbai girl Miesha is cool and confident. A radio jockey-anchor by profession, the earthy beauty won hearts during her stint on Splitsvilla, in which she was voted to be the most favourite contestant

Claim to fame: She won the Femina Miss India Manipur title in 2018. Currently playing the lead in ‘Choti Sarrdaarni’, she is winning hearts with her portrayal of Meher. The beautiful actress is confident and well-spoken.

Claim to fame: The beautiful Himanshi has a number of Punjabi hit songs to her credit, but her stint on ‘Bigg Boss 13’ brought her into the spotlight.

Claim to fame: The actress played the sensuous naagin in ‘Naagin 4’ and was also seen in ‘Fear Factor: Khatron ke Khiladi’.

Claim to fame: Her stint on ‘Bigg Boss 13’, especially her equation with Sidharth Shukla, made her popular. The Punjabi singer-actress has been a part of many music videos.

Claim to fame: The Telugu actress launched her B’wood career with ‘One Night Stand’. Last year, she made her TV debut with ‘Divya-Drishti’.

Claim to fame: One of tellyland’s most stylish actresses, Krystle is a hot favourite on social media.

Claim to fame: Last year, Ridhima was seen in ‘Haiwaan — The Monster’.

Claim to fame: Winner of ‘Splitsvilla Season 12’, she has done shows like ‘Tenali Rama’ and ‘Kullfi Kumarr Bajewala’.

Claim to fame: The actress is currently seen in ‘Kundali Bhagya’ and was a part of ‘Nach Baliye’ last year.

Claim to fame: The petite actress shot to fame as Ichha in ‘Uttaran’. She was seen in the supernatural thriller ‘Daayan’ in 2018-19. Her bold pictures and hot photoshoots are the talk of the town.

Claim to fame: She got popular with ‘Ishqbaaaz’ in 2018 and went on to play the negative lead in ‘Ek Bhram… Sarvagun Sampanna’. She has also been a part of Gujarati cinema.