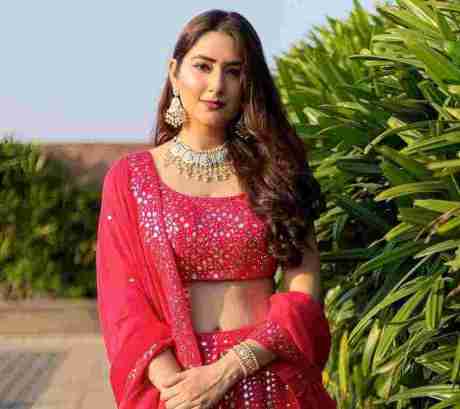 Disha Parmar has spoken about her participation in the new season of Bigg Boss. She mentioned that earlier she was offered the show but not this time. She does not wish to be a part of Bigg Boss next season for the second time.

Actor Disha Parmar has confirmed in her statements that she hasn’t been offered Bigg Boss this time. However, she added further that she has been offered the Salman Khan-hosted show in the past years. Disha has said that she was offered to be a part of the show, but she has never taken it up as she doesn’t ‘feel comfortable.

Disha has a different connection with Bigg Boss as it was during the reality show that her husband, singer Rahul Vaidya proposed to her for marriage. The show has a special place in her heart as it has created many memories for her. Last year, during Rahul’s presence in Bigg Boss 14, Rahul went down on his knees and asked Disha to marry him on national television. Isn’t it too cute? He also wore a T-shirt that had ‘Marry Me?’ written on it. Rahul and Disha tied the knot on July 16. The duo shares a cute story from proposing to getting actually married.

Disha quoted, “This time, no. Not yet. But even if they do offer me, I don’t think I’ll be comfortable. It’s a show which I don’t resonate with, I mean I don’t feel comfortable. I have been offered the show so many times, it’s just that I never did it because I never felt I was right for it, and I still feel that. So I think I am going to avoid this time too.”

Disha and Rahul tied knots in Mumbai in the presence of their family members and close friends. On a special day, Rahul wore an off-white silk and gold zardozi sherwani, while Disha was seen in a red ghagra. Both of them looked stunning and their fans were impressed. Their wedding was followed by a reception and was attended by their friends namely Rakhi Sawant, Pavitra Punia, Eijaz Khan, and Vikas Gupta, among several others.

Back in this month, the two of them had announced their wedding date with a joint statement. “With the blessings of our families, we are delighted to share this special moment with you all. We are elated to announce that our wedding is set to take place on the 16th of July. We seek your love and blessings as we begin this new chapter of love and togetherness,” they had said.

The couple was scheduled to get married after Bigg Boss ended in February. Their plans were shifted further due to the whole tense situation of the COVID 19 pandemic.