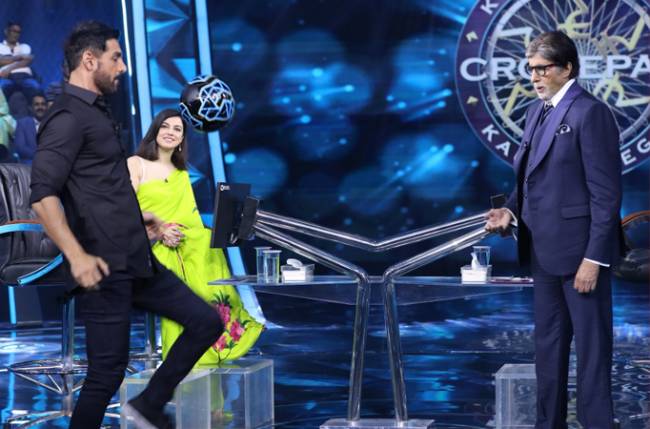 Sony Entertainment Television’s most loved game show, Kaun Banega Crorepati 13 is all set to offer a memorable and engaging evening with its upcoming Shaandaar Shukravaar episode that is all set to air this Friday. The special episode will welcome action superstar John Abraham along with the gorgeous Divya Khosla Kumar who will be seen playing the game with the host of the show, Amitabh Bachchan. Further joining them and lending the much needed support will be the film’s Producer Nikkhil Advani, Producer Madhuja Bhojwani and Director Milap Zaveri where, Nikkhil Advani will take over the hotseat and continue the game.

Amping up the fun and entertainment quotient this Friday evening, the guests will be seen interacting with Big B and share many personal anecdotes and industry experiences. John Abraham will be seen throwing light on his shooting days with Abhishek Bachchan in the film ‘Dhoom’ and also talk about their shared interest in football. Showcasing his skills, John will be seen performing some football tricks in the show and to everyone’s delight, Big B too joins in. John will also be seen expressing his love and respect for Mr. Bachchan and calls him a ‘National Treasure’. Taking a trip down memory lane, Divya Khosla Kumar and Nikkhil Advani will be seen sharing memories of how they’ve grown up watching KBC.

The guests of the upcoming Shaandaar Shukravaar episode will be seen playing the game and donating the proceeds from the winning amount for prevention of animal cruelty to Kalote Animal Trust and also support other such NGO’s with a similar cause.

So, be sure to tune-in to Kaun Banega Crorepati 13’s Shaandaar Shukravaar episode on 26th November at 9:00 pm only on Sony Entertainment Television.