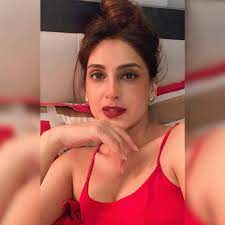 The actress is being lauded for her stellar performance in the show as well as for her stylish avatar.

Vedika’s character is shown as Ram’s past love who he still can’t get over while she has moved on and went on to marry someone else.

While this still remains a mystery to the viewers, however, soon, everyone will come to know about Ram and Vedika’s painful past that will bring a huge twist in the story.

We got in touch with Reena who spoke in length about her character in Bade Acche Lagte Hain 2 and much more.

With Ram getting married to Priya, fans are guessing Vedika will turn negative. Your thoughts on this.

I think it is a very natural human emotion. Ram and Vedika’s relationship has been very deep. The viewers have seen that Ram is madly in love with Vedika. Ram balances all the things in his life and he is extremely sorted in his life. But I think Vedika still loves Ram and has respect for him. When I talk about Vedika getting negative, I feel it is a very natural emotion. I think eventually, that’s something to look out for if the character turns negative or not. But Vedika’s character is very interesting. It is a very situational thing that is going to take a turn. She might turn negative slowly but there’s a possibility that she won’t.

It is Ram’s love that reflects in Vedika’s character. That’s what I personally felt. That’s how Vedika’s positivity comes out through that emotion. There are some mutual feelings which is why he loves her so much.

How did you bag the show?

This is my first show with Balaji Telefilms. I had auditioned for it. I have auditioned in the past for Balaji shows so many times. But I was never able to crack it. When this role came to me, I just gave an audition. I didn’t have any expectations of bagging it. I found the character very interesting so I went ahead with it. I did my bit as a part of my job. The makers liked it after seeing my audition and I was offered the part.

Vedika is shown extremely stylish, who is your style inspiration in real life?

I feel very happy that people are loving my style in the show. I get a lot of messages on social media about my styling. People are loving Vedika’s looks. I am a fashion lover in my personal life as well. That’s one thing that I really like. Everybody inspires me to a certain extent and I have my own style. I like to create something on my own. If you understand your taste and your body type, it helps a lot to create your own style.