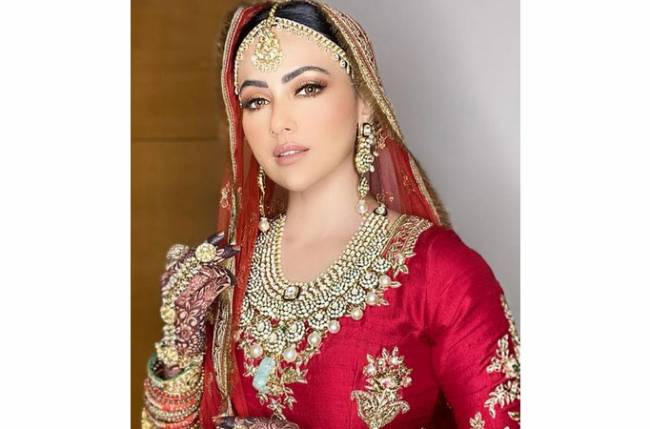 Sana Khan is known for her work in the entertainment world. She has acted in many films including Jai Ho, Halla Bol, and Yehi Hai High Society. She was also a participant in the controversial reality show Bigg Boss.

Recently, the actress brewed a storm across the internet after glimpses of her intimate wedding with Mufti Anas went viral. Sana looked like a dream in a white gown, as she walked down the aisle with the man of her dreams. Well, she is being flooded with good wishes from fans and her friends from the industry. Sana’s marriage took place some months after her decision to quit the entertainment world and follow the path of spirituality. Ever since then, Sana has been sharing many more pictures of her as a beautiful bride alongside her husband, Mufti Anas. Most recently, the former star gave a sneak peek into her gorgeous wedding attire.

In the pictures, Sana is seen posing in a gorgeous red lehenga with some beautifully done golden embroidery on it. She was sporting a sheer red and golden dupatta along with her attire. Sana completed her bridal look with heavy jewelry and subtle makeup.

It is being speculated that the actress was introduced to Mufti Anas by her fellow Bigg Boss contestant, Ajaz Khan. While officially sharing the good news with fans, Sana posted a picture of hers with Mufti along with a caption that read, “Loved each other for the sake of Allah, Married each other for the sake of Allah, May Allah keep us united in this Duniya, And reunite us in jannah …Fabi ayyi ala-e rabbekumaa tokazzebaan Which of the favours of your lord will u deny …#sanakhan #anassayed #nikah #married #20thnov #alhumdulillah.”