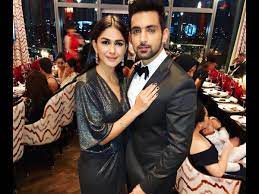 Mrunal Thakur is one of the rising stars in the Bollywood industry. She will be next seen in Kartik Aaryan’s next, Dhamaka. For those not in the know, Mrunal Thakur entered the entertainment industry as Gauri in the TV show Yeh Khamoshiyaan. However, she rose to fame with Kumkum Bhagya as Bulbul. She played Sriti Jha’s sister on the show.

In the popular ZeeTV show, she was paired opposite Arjit Taneja. They were one of the most-loved on-screen couples in the TV world. Mrunal, however, left the show soon after. That did not affect her bond with the cast and crew of Kumkum Bhagya and she is to date friends with everyone. And now, reports state that Mrunal is in a serious relationship with her KB co-star Arjit. Yes, you read that right.

It was rumored that the two were seeing each other, however, now a report has confirmed that the two are truly in a relationship. Furthermore, the report states that Arjit and Mrunal have been keeping it private. They are not ready to make their relationship official said a source, reports the portal. Both Mrunal and Arjit are very active on their Instagram handle but refrain from posting pics and videos with each other.

In August this year, when Mrunal celebrated her birthday, Arjit took to his social media handle to share their loved-up pictures. Arjit captioned the post saying, “Happy birthdayyyy Pagli! More n more love happiness, and success to you. Have a “toofani” one 😉 Love you #dontusetheFword.”

Meanwhile, the TV industry’s rumor mills were abuzz with the reports of Arjit dating Kumkum Bhagya’s lead Sriti Jha. This report of Peepingmoon.com has now quashed the same. On the work front, apart from Dhamaka, Mrunal also has Jersey with Shahid Kapoor, Ankh Micholi with Abhimanyu Dassani, Sharman Joshi, Paresh Rawal to name a few.