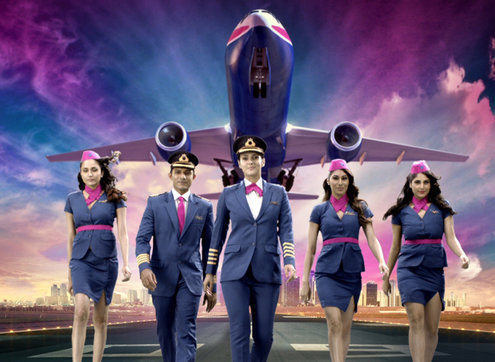 Airlines Watch online Airlines is the latest Hindi serial of Star Plus, which is about to begin. Famous production house, Miditech india Pvt. Ltd has produced the upcoming show of Star Plus. This production house has already presented many hit serials like, Ab India Todega, Saara Aakash, ChoonaHai Aasmaan, Guinness World Records and Lux Perfect Bride. The new Star Plus serial Airlines will be featuring Tulip Joshi and VJ Yudhishtir in main roles.

The story of Star Plus upcoming show is based on love story of modern era. The leading duo of Airlines serial will be seen as the character of pilots. This show will showcase the young age attraction towards opposite sex. Many other channels have already presented many shows based on same subject.

Multi talented actor VJ Yudhisthir has been roped to play the male lead role in Airlines serial. Yudhisthir is also familiar by his nick name, Yudi. He will be playing the role of a pilot in new Star Plus show. Yudi has already host many shows on television and some live events too.

The female lead in Airlines serial will be essayed by beautiful Tulip Joshi. She will also play the role of a pilot in this show. The hot diva Tulip was a participant of Miss Femina India 2000. She was seen in Bollywood movieHostel with Vatsal Seth. Other Bollywood movies of Tulip Joshi were,Daddy Cool, Mere Yaar Ki Shaadi Hai, Dil Maange More, Jai Ho and others. 34 years old Tulip has also worked in some Punjabi Movies.

The timing schedule of Airlines serial is awaited yet. Still it is assumed that the show might start in last week of July. It might replace the time slot of Mahabharata serial. It’s too early to predict, the makers haven’t released the promo yet. We will soon update here with some more information of Airlines serial.

Updated: Airlines serial is confirmed to be start from 30 August onwards. It will be shown on every Sunday at 9 PM.