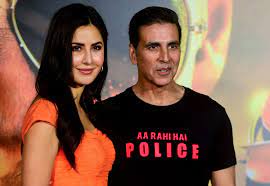 Katrina Kaif had to slap Akshay Kumar without any retake for a scene in the film. The actors will appear on The Kapil Sharma Show and speak about working together.

Directed by Rohit Shetty, Sooryavanshi features Akshay Kumar playing the role of a DSP and Katrina Kaif as his wife.

The actress talked about a scene in which she had to slap Akshay. Kapil asked her about retakes and she replied, “No there was no retake in the scene in which I slapped him. It was done in a single shot.” Akshay added, “It actually happened. She really hit me. The gap would have become visible so she slapped me in reality.”

In an old interview, Katrina had spoken about hitting Akshay while filming Welcome. “I slapped Akshay while shooting for Welcome. I was required to slap Akshay for a scene. I did that, but somehow it was not looking real and the director called for a retake, I did the shot again, but I wasn’t able to get it right. Akshay got fed up and shouted ‘Come on slap me hard’. I got carried away and landed one tight slap on his cheek, everyone just froze on the sets, and there was pin-drop silence,” she had said.